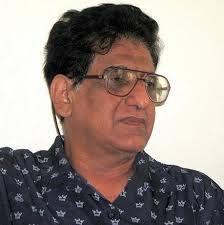 Dilip Kumar, whose mother tongue is Gujarati, a well-known short story writer in Tamil with several awards to his credit. He has published two collections of short stories (Moongil Kuruthu, Cre-A, Chennai, 1985, and Kaduvu, Cre-A, Chennai, 2000) and a critical work on Mauni – a pioneer of Tamil short stories(Mouniyudan Koncha Thooram, Vanadhi Pathipagam, Chennai, 1992). He lives in Chennai and runs a small literary bookshop.

Book-Bound!  (A profile on Dilip Kumar)

“I LOOKED for a bride in the Tamil community. Any other woman would have been unhappy with me”. No, this was no demand of a Tamil-born NRI hunting for a “homeloving” helpmeet, but the need of a Gujarati aficionado of the Dravidian tongue, with a passion for its literature, especially in its contemporary expression.

I was listening to Dilip Kumar, a Chennai-based bookshop owner, in his tiny office cubicle, inhaling the smell of fresh books piled around us. My search for avant garde texts and little magazines in Tamil led me to his den. The big bookstores stocked mostly classical and popular works. But a friend advised me to try Dilip Books. “Not only will you get what you want, but also learn from the owner what you should read”.

Following his directions, I located the building opposite the Ramakrishna Mutt in Mylapore. The shop itself was tucked away in a corner upstairs, its unassuming nameplate hidden by a leafy branch.

Dilip Books doesn’t need to blare out its existence. It serves a niche market of insiders, almost all of them friends of the owner.

But how did a boy from a North Indian business community settled in Coimbatore, with no academic training in Tamil, who dropped out of school after the 9th class when his father died, and subsequently made ends meet as teaboy, textile salesman, lottery ticket seller, and drycleaner’s assistant – manage to win such a unique place for himself in the realm of modern Tamil literature?

“My interest was self generated, I got books and taught myself to read and write Tamil”, he explains. Soon the twenty-year-old was sending his short stories to little magazines like Kanaiyazhi, Gnanaratham and Kaal. How thrilled he was when Ilakkiya Chintanai, Madras, chose one of them as the best short story of the year!

Other achievements? He has two short story collections (Munkil Kuruthu, Kadavu); a critical assessment of the writer Mouni; translations from Tamil into Hindi and Gujarati, as also from English, Hindi and Gujarati into Tamil; co ordination of Tamil short fiction anthologies and translation projects for several organisations. Recently, he gave a series of lectures on contemporary Tamil writing at the Tamil department of Berkeley University in the U.S.

Dilip Kumar will tell you that his 12 years with Cre-A publishers and booksellers, Chennai, provided not merely training in the business, but also developed his taste for contemporary Tamil literature.

Until the 1970s, there were few outlets for quality books. “It is small organisations like Cre-A and Annam (more recently Kalachuvadu) which began to produce and distribute them”. He recalls how the early efforts of A. K. Jayaraman and A. K. Gopalan in publishing world literature in translation met with dismal failure. The books had to be sold off as waste paper! (“Now they bring out bhajanai and bhakti books”.)

In 1990, Dilip Kumar left Cre-A to start his own bookshop, focussing only on contemporary works in Tamil. He was encouraged by his landlord, Dr. Badrinath of Sankara Netralaya, who allowed the tenant to start the shop in his house. Though the capital investment was not much, it was a struggle all right.

Ten years down the line, Dilip Kumar is aware that there is no security or stability in the business, nor any great profit. “I do it out of love, I am satisfied to get no more than a livelihood out of it. In the cultural field today, financial success invariably brings dilution of standards. My real success is the contacts I maintain with the people who share my values. My reward lies in the work itself”.

He notes that new writing has more visibility today than ten years ago. He also perceives the gulf lessening between the serious and the popular streams. Dailies like Dinamani and channels like Sun TV do give coverage to alternative literature. Jayamohan and Prapanchan are featured in the popular weeklies. There are more readers of modern verse than ever before.

And yet, “Readership of serious writing is confined to a small group. A new reader is initiated almost by accident”. The academia concentrates on classical works at the cost of the modern. “School/college syllabi dismiss everything written in the last 100 years!” he exclaims. “That despite the fact that the novel is the major contemporary expression of 20th Century experience”.

Teachers are prejudiced towards modern literature since they lack exposure to and training in the genre. Moreover, in a State where politicians are writers, books get prescribed in academic institutions more for reasons of politics than aesthetics.

I glance at the rows of books piled on the wall shelves. He answers my unspoken query. “Literary works are not consumer goods.

Sales depend on reader awareness, and as a book seller I don’t have the power to form that. Creating good readers is the collective responsibility of the society”.

I leave with uncomfortable questions: without sound readers, can we get solid writers? Minus intense interaction between reader and writer, can any society make meaningful progress?