Anjalai is the story of a village girl, Anjalai, brought up by her mother. She has elder sisters and a younger brother. Her mother, Bakkiam, has had a tortuous life, like all mothers she has the tenacity to brave all sufferings and humiliations to bring up her children. She never gives up. Her two daughters are married and Anjalai comes of age and her mother asks her second son-in-law to find a groom for Anjalai. But she is shocked to find that he has other ideas, of himself marrying Anjali as his second wife. Mother and daughter spend sometime over it and finally agree to it as there is no other male in the family to protect them. But the second daughter, Thangamani throws up tantrums and refuses to entertain her younger sister as a rival in the family. Anjalai puts an end to the strife in the family saying that she does not like brother-in-law. 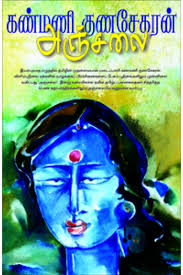 Enraged by this refusal, her brother-in-law brings a proposal from the neighbouring village. Seeing a tall robust moustached man presented as her groom, both Anjalai and her mother, Bakkiam are impressed and agree to it. It is only at the last moment of tying the marital chord,. the groom tying the knot is not the tall moustached man who had come earlier, but an ugly short man with physical disability. Anjalai and her mother have been victims of deception by her brother-in-law and the groom’s family,. But they find themselves helpless. Anjalai goes to her husband’s village and she tries to makes the best of the life by spending her time amusing herself in the field and bathing in the tank. she could not forgive her husband and his family. She would fly into a rage if any of them says anything to her. A wounded animal for ever prancing in the tege. She knows her husband was only a pawn in the game of deceit played by his family, but she could not accept him as her husband. The moustached is very much a constant present in the family, married with two children. His wife sees in Anjalai a potent looming danger to her. And that is reason enough for her to be shouting at Anjalai and abusing her. Anjalai’s passion is roused, seeing the moustached man so near in the house. But the moustached is scared of his wife avoids Anjalai’s advances.

Life in that house becomes unbearable and Anjalai runs away. While on her run, she meets her sister Kalyani and her brother-in-law Arumugam, a fair coloured handsome young man. She was to have married him, but somehow it did not happen. Her dormant passion, un-quenched for long, is roused and she marries Arumugam and goes to his village. There again, after a period of conjugal life it dawns on her she is cheated for a second time. She finds out Kalyani has illicit relations with Arumugam. It is an escape for her from her husband who is a drunkard. Anjalai gives birth to a child in the meanwhile. By some strange quirk of fate, Kalyani also becomes pregnant. Consequently, Kalyani and her paramour start abusing and physically torturing Anjalai. Anjalai could not stand it beyond a point. She returns to her mother’s village with the child.

It is not to a life of peace she returns. She is scolded by all the village, as a run-away, husband snatcher, a prostitute and so on. Every woman feels threatened by Anjalai. She leaves the child with her mother and runs away.

She meets her old friend Valli who takes Anjalai to her first husband. She does not love him. But then she could settle down and raise a family. Years pass and she becomes mother of two more children. The villagers continue to hurl abuses at her. Friction continues in the family. Her first child, Nila is now a grown up girl. Her younger brother takes care of her and gives her education. Anjalai begs her younger brother to marry Nila. But he prefers to marry another elder sister’s daughter, that would bring him enough money. Anjalai’s husband does not like her visiting her mother and daughter. Nila is subjected to a kind of life similar to her mother’s, she is abused by her husband, family and the villagers. At one point Anjalai is thrown out of the house and beaten. In exasperation, Anjalai tries to commit suicide. Nila runs to her and abuses and beats her mother to bring her to senses. In that climactic moment, explosive burst of emotions, abandoned by the world in their utter helplessness mother and daughter find solace in each other.

Narrated thus, the synopsis may sound like a melodrama, high pitched emotions, but it is exactly these the author scrupulously avoids. It is a world of women, who are ruled by raw passions, hunger and sex, the very basic needs of a human, there are no high ambitions, ideals. It is just bare living and there is no refinement either in the consciousness of these characters or thoughts of anything higher and ideal. It is a world of women, ordinary women with simple desires. Though they are not dependent on men for their living, they work and earn and yet, the males dominate and rule their lives. They are forever subjected to humiliation, abject surrender. Women too, suffer and yet they reconcile and continue to pursue their passions. They live in clusters and cannot opt out these clusters. They move from one cluster to another only to suffer the same fate. They know of no world beyond these clusters.

Kanmani Gunasekaharan unfolds the life as observed by him. The characters speak the language of their day to day discourse. The depth of experience is not to be seen in the author’s narrative and interpretation. It has to be seen in the life that unfolds and the language the characters speak and in their diction and colloquial form. It is in the context of that life it acquires depth. It is a writing in which the author’s intrusion is least seen. It is a masterly achievement. The author himself has said that it is not his intention to talk about them and their lives, but only to present them as truly and faithfully as he observed them and withdraw.

Kanmani Gunasekaharan, born the 19th of May, 1971, is a man tied to his rural life and people. wholly uncorrupted by urban ethos and its moorings. He has brought out one more novel, three volumes of short stories and two volumes of his poetry. He is presently engaged in compiling a dictionary of colloquial terms spoken in his district.

Disclaimer : We are a bunch of volunteers who are running this site. We don’t make (or plan to make) any money from this site. We will not use the translations displayed here (or anything derived from them) for any commercial purposes. Due care will be taken to attribute the original text to its source. If the rightful owners of the original text mail their objections to tamil.madhuram@gmail.com, the translations will be removed.